Hello, nice to meet you! Welcome to the homepage of the Hebbelschule, a European school that specializes in languages and exchange programs for our students. We look forward to meeting you in person! Why should you come here? Feel free to do some research about our current projects, excursions, competitions, and ideas concerning the development at school. They will give you the answer as to why Hebbelschule should be your choice.

Since 1996, Hebbelschule has been known as a dedicated "Europaschule". Being a European school is not just what "Europaschule" means to us. The students and the teachers discuss political problems, different lifestyles, and other cultures. The situation in Europe is one of the main topics in subjects such as English, French, Spanish, politics, and history. Thinking about European society and social behavior is quite natural at this school.

Written by Lisa and Rebecca (10c)

Hebbelschule is - like other schools - an educational institution in Europe. However, a “Europaschule“ participates in a lot of projects about Europe, its member states, cultures and values. Thinking about Europe should be a normal thing and it has become the profile of this school. The topic “Europe“ has a broad meaning and is more than geographic borders of the members of the European Union.

Thinking about Europe – What does it mean for our school?

The first exchange with our German partner school - die Deutsche Schule Helsinki - was organized by Dr. Erhard Lipkow in 1993. He was a teacher in the Finnish school and he wanted the German kids to participate in this experience. The Finnish kids come to Germany to practice their German, the language they have been learning since 3rd grade.

The first exchanges took place in summer holidays, so some kids spent 3 weeks without seeing their German friends, but soon it was changed, so the kids could meet during the school.  In 2002 Mrs. Wahlbrink-Herrmann, one of the music teachers, began to organize this exchange. First, the exchange took place every 3rd year, but nowadays it takes place every year.

About 22-24 pupils of the 5th and 6th grade of the Hebbelschule go to Helsinki in September to stay for 2 weeks in host families.  It’s not necessary to speak Finnish, because the language of this exchange is German, but if you go into the city, you might need to speak a little bit of English. Before the exchange begins, the pupils write let- ters or e-mails to their exchange partners to get known each other.

The Finnish kids come to us In the spring for 3 weeks to live in a German family. Most of the time, there are no problems with their knowledge of German.  After the exchange the kids keep in touch and some of them meet again.

Written by Jacqueline and Lena (10c)

Every year a group of 20-30 pupils from year eight travels with a ferry to York, Northern England. During the exchange the pupils are staying at host families to get to know the English lifestyle.

The group does a lot of sightseeing, for example visiting the City Walls, the York Minster, the Castle Museum and the Yorvik-Centers. There are also a few other day trips including driving from the east coast of Northern Yorkshire to Robin Hood's Bay, an old fishing village and from there hiking along the steep coast to Whitby.

On another day they travel to London by train, where they cross the river Thames to see the Tower of London, the Big Ben and other famous buildings. After that the group walks to the Oxford Street to go shopping.

The Germans are also participating in lessons at the English schools and spending the whole weekend with their host families, who show them other parts of the city or country.

If you want to get more information, you can contact Mrs. Kannenberg or Mrs. Baudhuin.

Written by Sara and Samira (10c)

Every two years, pupils from grades nine to eleven are able to get to know the way of life on the spot.

What are the French like? Has globalization already blurred all cultural differences? How many kisses do they give each other when they greet?

You will get the opportunity to try a lot of new experiences and collect unforgettable memories with your host families, at the school “Jehan Ango’’, and during a lot of trips to Normandy or to Paris!

Written by Bendix, Bo and Justus (10a)

21 pupils of year 9 spent 10 days in February in Seville, Spain for a school exchange.

The official welcome was impressive as you can see:  "It's really different", a pupil said right after the arrival. In the pupils' opinion, the nice weather and the hospitality were the best things right next to the beautiful ambience of palm trees and orange trees decorating the streets of the city- even though the oranges were too bitter to be eaten. Poor people who tried ;-)

The trips were pretty impressing:  Firstly discovering the HUGE "Plaza de España", the German pupils and their teachers went downtown in Seville.  Another day, they discovered the historical city Córdoba with its world famous Mezquita-catedral which is basically a church-mosc hybrid. This time with their exchanges. The third trip brought them to the Atlantic coast, more particularly to the sunny Cádiz. It was an awesome experience for German and Spanish pupils, not only seeing a real bullfight arena but seeing the beautiful old-town from the top of the "Camera Obscura" which is a lookout tower with an ancient "camera" in it. Speaking for everyone visiting the tower, the view was unforgettably beautiful.  The other days, the German exchanges had to participate in the normal Spanish school life, spending 8.5 hours in the school which was pretty strict. Mobile phones are strictly forbidden, a uniform has to be worn (even in PE) and the teachers are really strict as well. And in comparison to the Hebbelschule, recreations were really few.  The food was different too: plenty of (olive) oil is used as well as a LOT of meat. The preparation and later consuming a “Paella” was great joy for the German pupils.  Spanish beds are made differently. Usually there’s only a thin brine but the Germans received a few more wool blankets for the case of getting cold. But Spanish pupils go to bed really late. Two am wasn’t unusual during school time because the school ends really late and the exchange partners had to do homework and later they met up for having pizza, walking around the shopping centre or just hanging around. This is relatable when you have these kinds of temperature in February.

“Returning tiredly but happy, with lots of new impressions we can definitely recommend this exchange” - the pupils

Written by Fabian and Yuri (10c)

Since 2006 the Hebbelschule has been participating at economy work placements with a German school in Bilbao, Spain. If pupils keep learning Spanish in the 11th grade, they have the possibility to get one of five places for the work placement.

During the two weeks they live in a host family in Bilbao and collect new experiences and impressions. The Spanish pupils come to Kiel for two weeks as well to absolve their work placement here.

After the flight, the exchange students have three days to relax before they have to work on the first day of their work experience.  You can choose to work at a kindergarten, hotel, pharmacy, butcher, eventagency, football club or surfschool.

The pupils do not only get impressions of the world of work but also improve their Spanish skills.

Written by Anouk and Maja (10c)

Who we are:
We are pupils from 9th to 12th grade who are engaged to improve the school day.

What we do:
We represent the pupils' interests with 1/3 of the votes in the school conference and we also are an im- portant part in various committees. Additionally, you can buy school supplies and get toys for the break in the school council room. We also plan a lot of fun activities like the Christmas bazaar, several parties and we accompany the fifth grade to their first school trip on which they get to know each other.

We are looking forward to seeing you. 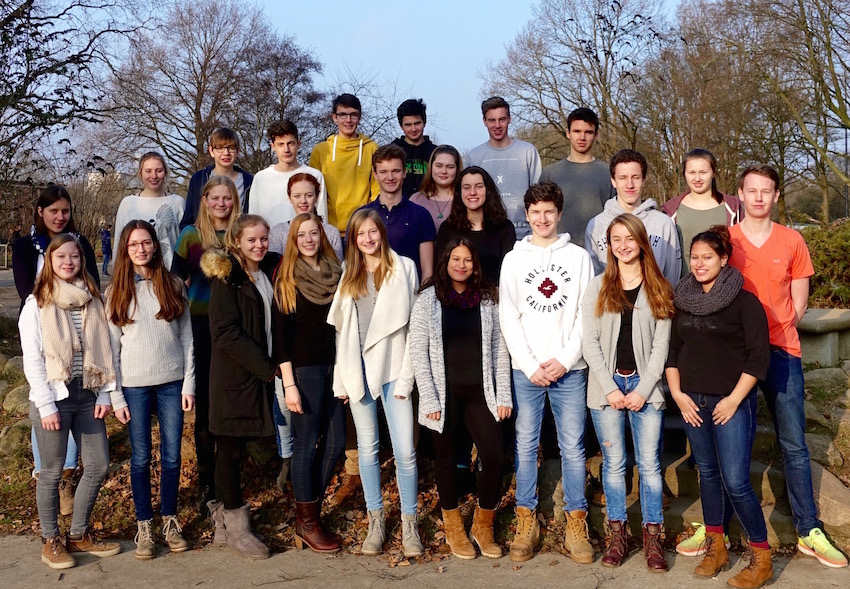